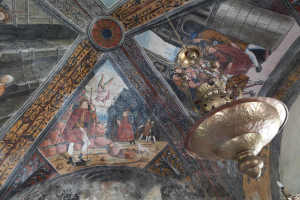 The Varaita Valley, in addition to its rich heritage of rural architecture, preserves small treasures of art. Most of it belongs to the historical period of the Middle Ages, in particular to the era up to the beginning of the 16th century, when the Marquises of Saluzzo, being great patrons, ruled the land of the Varaita Valley from Verzuolo and Costigliole as far as the municipality of Sampeyre. From this period dates, for example, the fresco “Cristo di Pietà,” an artwork preserved in the crypt of the steeple of Costigliole S., created by Hans Clemer, better known as Maestro of Elva, due to the fact that he painted his masterpiece in the parish church of Elva (CN), near the Maira Valley. This Flemish painter, who certainly is the most renowned artist of the Marquisate in the period from the second half of the 15th to the first decades of the 16th century, created, also in Costigliole, the fresco “Madonna among the Saints” inside the Castello Rosso, which nowadays accommodates a hotel.

Other paintings of considerable interest are those of Pietro di Saluzzo, which are conserved in Verzuolo in the old parish church of the Saints Philip and James. Next to the parish church rises the steeple, whose first floor dates from the 11th century and the other four from the 12th. Below the steeple there is a small chapel with a barrel vault, where frescos dating from the last decade of the 11th century are still visible. They tell the story of Saint Nicholas of Bari and belong to the oldest pictorial testimonies of the province of Cuneo. Going up the valley, to the municipality of Brossasco, we encounter a small chapel dedicated to Saint Roch, with frescos from the early 16th century, accredited to Pascale Oddone.

Also of significance is the parish church of Saint Andrew with its gothic portal from 1406, the only example of a flamboyant portal in the province. Concerning portals, the Gothic one of the parish church of Rossana has to be mentioned, with a gable that towers above it and a decoration that besides stone is also made of brick, in the manner of the French style. On the façade there is a large painting of Saint Christopher (16th century).

Finally, in the upper valley, which with the exception of Sampeyre was not part of the Marquisate of Saluzzo but one of the four administrative sectors of the Republic of the Escartouns, the Biazaci brothers dominated the artistic scene. Their artwork can be seen not only in a small chapel in the district Chiot Martin in Valmala but also in the parish church of Sampeyre, which is of gothic origin. A small door at the side entrance and sculpted stone capitals inside date from this period. Here the Biazaci painted some scenes of the life of Christ, of which the “Adoration of the Magi” and the “Nursing Madonna” remained well preserved.
In Casteldelfino, recent restorations inside the parish church, which is already renowned for its splendid portal with a soffit, brought to light further paintings of the two brothers, dating from the second half of the 15th century.
Other paintings of precious artistry, dating from 1545, are preserved in the parish church of Isasca, which was first mentioned in 1386. They depict the Evangelists in the lower part and in the upper part an Annunciation, certainly painted by another hand and much older.
The parish church of the district Chiesa in Bellino is famous for its stone steeple, built in the Romanesque-Alpine style, and for some sculpted stones that are older than the construction of the actual building and were reused for the stonework. The most famous of them is a head with a nimbus, an old Celtic symbol of pre-Christian origin.
That we find three religious buildings in Chianale, a small district of the municipality of Pontechianale, is proof of the strong conversional measures that were instigated during the Counter-Reformation, which followed the Protestant heresies that had become rooted in the upper valley. The oldest religious building is the chapel of Saint Anthony, dating from the mid-15th century, which preserves a steeple with a stepped gable. The only other example of this architectural element in the valley is the one of the chapel of Saint Eusebius in Casteldelfino. Inside Saint Anthony’s we find sculptured stone capitals and traces of frescos that show the Judgment, dating back to the first half of the 15th century.
To admirers of the baroque style, the parish church of Venasca with its octagonal floor plan should be mentioned. It was built in 1750 as a project of the architect Ruffino. The interior is decorated with multicoloured marble and frescos of Pietro Antonio Pozzi. It is one of the most important examples of baroque architecture in the territory of Saluzzo.