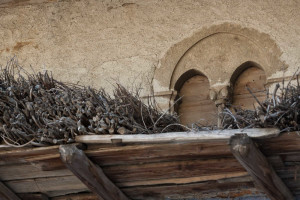 Severe and massive stone houses, narrow streets, wood-fired ovens and fountains. Isolated clustered buildings, once self-sufficient, that have retained an extraordinary atmosphere. In Bellino, tourists can wander through the hamlets to discover a staggering number of sundials. The hamlet of Chianale, recently listed as one of Italy’s most beautiful villages, is particularly picturesque. You will be surprised by the artistic heritage of this valley: folk frescoes, roadside shrines, houses, chapels, as well as refined masterpieces left by the painters that in the 15th century worked in churches and parish churches, harmoniously blending late medieval style with Renaissance innovation.

The Varaita Valley has always been very populated; climate conditions and land are very favourable for farming activities. In the past this allowed, and it still allows today, the use of natural resources at any altitude, thus reaching 1800 m a.s.l. and even 2600 m a.s.l. with some summer houses, like for example the Grange Sabious in Bellino.
In the valley farmhouses and hamlets, most of which are still unspoilt, refine the landscape and enhance from generation to generation the natural environment thanks to human work.
In the whole area of the Western Alps the type of housing was conditioned by two cultural factors: first, the heating system with a fire-place, which entails a shared house where men and livestock live under the same roof. Second, the custom of dividing the inheritance in equal parts among the heirs, according to the rules of Roman law: this often caused the splitting of the properties in little allotments and the adaptation of the house in order to accommodate the enlarged family.

In this segment the territory of the valley that extends as far up as Brossasco may be included. It corresponds roughly to the area of the chestnut forest.Here the house is of a limited dimension: a small stable and a tiny hayloft, walls made of small-sized stones, beams of deciduous trees, stone slab roofs; the houses form small centres close to springs or plots.
There is no lack of huts where the chestnuts are dried, small structures with two stories that are divided by a horizontal grate, on which the chestnuts are spread in order to dry in the smoke of the green twigs burning slowly in the lower story. This is the method to produce the so called “castagne bianche”, the white chestnuts.

It consists of the municipalities of Valmala, Melle, Frassino and Sampeyre. The farms are small and independent but united in settlements, sometimes of large dimensions, in which the houses are always very close together, even touching, because of the successive periods of expansion.
Almost all the families owned a summer residence (meira) close to the private and municipal pastures, where they moved with their livestock for four or five months of the year. The house almost always had the façade with the gable turned to the valley and the roof ridge orientated along the maximum slope of the terrain. In Sampeyre the larch begins to replace other building timber. In the stonework the use of partially worked stones for cornerstones, architraves and doorposts occasionally stand out.

It consists of the municipalities of Casteldelfino, Pontechianale and Bellino, which erstwhile formed the Escarton de Chasteldalfin, today known as Castellata, once Dauphin territory, then part of the French Kingdom until 1713.
Here, more than anywhere else, the customs of the patriarchal family were conserved. They hemmed the carving up of the land and the rampant growth of the houses. Therefore the houses are bigger and richer because they are the residences of flourishing farms. They are also more voluminous because they have to house large herds and consequently also the hay needed for them for seven months.
One of the decorative structural elements is the round column (pilia rionda) made of stonework, often plastered, which supports the eaves of the roof on the façade as well as on the side. This architectural element, present in the whole Varaita Valley and in the neighbouring Maira Valley, gives humble farm-houses the dignity of monuments. The pursuit of beauty appears also in the details: the worked stone, the two-arched window with its elegant little middle column, the portal, the long balcony, the decoration, the sundial, the votive fresco, not to mention the mysterious heads sculpted in stone which are clearly of Celtic origin.