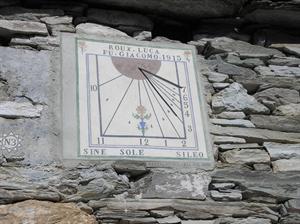 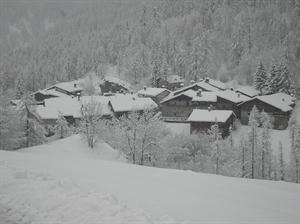 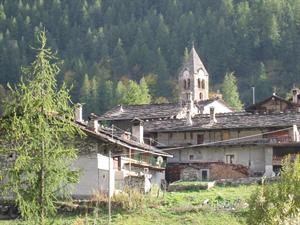 Together with Pontechianale, Bellino (called Blins in the local language) is the highest municipality of the valley. It consists of ten villages, characteristic examples of alpine architecture in the Monviso area. Hamlet Chiesa is the heart of the municipality: a group of houses gathered around the fifteenth-century Parish church of Saint James. In hamlet Celle there is the eighteenth-century parish church of the Holy Spirit. On numerous facades you can admire nice frescoes, probably works by local artists.
The territory of Bellino, divided into two parts by the Varaita river, since the 12th century was disputed for a long time by different lords: on the left bank the Dauphin of Vienne (Vienne is a town on the Rhone), on the right bank the Marquis of Saluzzo. The Dauphin expanded his possessions, defining the boundaries of the so-called Castellata, which included the villages of Bellino, Casteldelfino and Pontechianale and he recognized administrative autonomy to the Federation of Briançon. In 1343, the Grand Escarton was born, which also included the Castellata and other cross-border districts (Queyras, Briançon, Ulzio, Pragelato). The Marquis of Saluzzo ceded the rights to the lands on the right bank and exempted the people of the Castellata from paying tolls and duties for transit and trade through the Marquisate. In 1713 the “Briançon Republic” was dismembered by the Peace of Utrecht, which put an end to the War of the Spanish Succession. The cisalpine Escartons were given to Piedmont. France, Spain’s ally, tried in 1740 to recover “les vallées cédées” (the ceded valleys). In 1744 there was a bloody battle between Piedmontese troops and Franco-Spaniards in Bellino (near Punta Cavallo), the French won.

High is the number of those killed in the First World War and those of the Second, many missing in Russia.

The population of Bellino has undergone a sharp decrease over time, due to emigration: first directed towards France, then towards the factories of the Piedmont plain.

Bellino has preserved its ancient charm as a high mountain agricultural community.

The hamlets of Chiesa and Celle have been included in a redevelopment project sponsored by the Piedmont Region called Borgate; European funds allowed the restoration and renewal of these magnificent alpine villages.

Particularly noteworthy is the rich heritage of sundials, recently restored and inserted in a suggestive and fascinating itinerary. Also the museum in the hamlet of Celle is dedicated to time and sundials.

MUST-SEES:
- the so-called “têtes coupées” (anthropomorphic heads used as ornamental elements according to the custom of ancient Celtic populations) and the megalithic portals;
– St. James’s parish Church in hamlet Chiesa;- the historical fountains, dating back to the 19th century, made from a single block of stone dug in the form of a tank;
– the sundials and the “Museum of Time” (in hamlet Celle); the itinerary “Bellino solare”;
– the astronomical observatory in hamlet Celle (Mas di Brun). The structure was built with cultural, educational and informative purposes, completing the project to enhance the ancient sundials. For information: Municipality of Bellino, tel. +39 0175.95110; “Bisalta Amateur Astronomers Association”, tel. +39 349.2366228 (to book special openings for groups).