It is a common belief that the alpine landscape is essentially a natural space. In realty what we see today is the result of man’s continuous and incessant modification of the natural environment. The historic landscape of these valleys is a “complex machine”. Settlements, architecture, cultivated land, terracing, alpine meadows, forests, canals and mule tracks represent interdependent single elements of a sole integrated system that in the past was mainly based on the movement along the altitudinal belts according to the seasons.
This huge created landscape served historically as a proper “ecological infrastructure” for the everyday life and the work of its inhabitants.
The architectural structures and the hamlets represent the most evident and recognizable elements of this created landscape.
In realty every single valley, small lateral valley or area has in the course of the centuries elaborated its own specific typology of settlement and architecture.
A recurring element of this territory is without doubt stone, the main material of the landscape and for the construction of settlements. Stone is used for walls and vaults, for lose (slabs) to cover the roofs and for outdoor and indoor pavements. The old hamlets are basically made of stone; alone in the valleys of Po, Bronda and Infernotto they count more than a hundred, a proof of the territory’s strong anthropisation.
Communal structures and buildings, like chapels or bake houses, can often be found in the hamlets, whereas at higher elevations the meire, the temporary dwellings used during the summer transhumance prevail.
All these different hamlets and alpine meadows are connected by a dense net of trails. The most frequented routes are paved with stones and transformed into mule tracks.
Ascending from the lower to the upper valley a progressive transformation of the buildings, due to the determining influences of altitude and climate, becomes obvious. 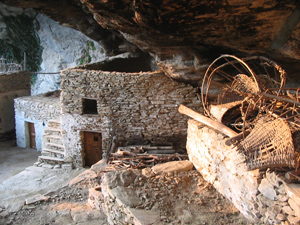 This factual geographical meeting point between the horizontal landscapes of the plain in the Cuneo area and the vertical lands of the Monviso Massif represents sort of an island with specific characteristics cradled in the landscape of the lower valley.
The settlement type of the balma or barma, characterised by protruding rocks sheltering the buildings placed under their protective overhang, reaches its maximum development here. It is a model spread throughout many places in Piedmont, but here it is not the simple, isolated construction that sometimes can be found but rather a proper village built under the shelter of the overhanging gneiss rocks.
Roofs covered with overlapping slabs called lose, a characteristic element of alpine architecture, are almost inexistent here.
From this point of view Balma Boves, a well-structured settlement at an elevation of 650 metres in the municipality of Sanfront on the south slope of the Monte Bracco Massif, represents an extraordinary case.
The hamlet that was inhabited until the 1950s and now restored is situated in a forest of edible chestnuts and constitutes kind of a microcosm with its livestock stalls, rooms to live and work in, the oven, the washhouse and little squares paved with stone.
Obviously the balme represent settlements of very ancient origin that together with the widespread findings and petroglyphs in the area of Monte Bracco prove the existence of anthropic sites since long bygone times.

THE UPPER VALLEY: THE CASE OF OSTANA 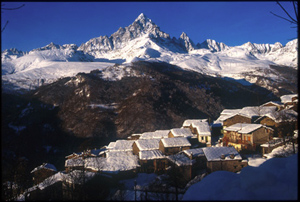 The districts of Crissolo, Oncino and Ostana represent a heritage of significant historical, cultural and material value.
Some of these districts can be counted among the best examples of historic alpine architecture. For some time now Ostana has been an important reference point for the restoration and enhancement of alpine architecture. Indeed, from the mid-80s onwards the local community has followed a widespread and shared policy of reusing the ancient mountain structures taking quality into account.
The interventions affect public as well as private property, and buildings as well as the open spaces.
The reuse and the improvement of the architectural heritage created a new identity and recognizability for this little mountain community, and consequently led to an economic and social rebirth.
Architectural quality, identity and a new inhabitability, environmental sustainability and a tourist offer appropriate to the places are Ostana’s strong points for the future.
This philosophy has recently been awarded with the admission to the association of Italy’s prettiest villages, “Borghi più belli d’Italia”.