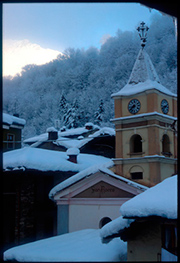 When on the 18th of November 522 the presumed burial site of San Chiaffredo was found under miraculous circumstances, the inhabitants of the place erected a small church dedicated to the saint.
The first certain mention of the existence of a church near Crissolo dates back to the year 1375 and from that date on plenty of testimony exists relating to this church that already at that time was a destination for devoted pilgrims. Under the Marquis Ludovico II (1475-1504) the small church was replaced by a pilgrimage church of larger dimensions, being further enlarged in 1551.
The pilgrimage church saw periods of assaults by Valdese and Huguenot heretics. The restoration and enlargement works in the 18th and 19th centuries finally gave the church its present appearance. Popular devotion and faith in the saint – since 1642 Chiaffredo’s relics have been conserved in the cathedral of Saluzzo, with the exception of a thigh bone, a hand and a small portion of the body that are still in the pilgrimage church – are proved by the large number of ex voto that adorn the walls of the church: they count more than one thousand and among them the recent ones are numerous, demonstrating that the devotion for the saint still lives on today.

Shortly above the main village the chapel of San Bernardo is located in the district of the same name. It is difficult to establish the time of its construction, although on the back and side walls of the apse frescos dating back to the end of the 15th century were recently discovered that seem to indicate that the chapel was built in that century.
The chapel is of modest dimensions, built with local stone that was left unplastered on all sides with the exception of the entrance facade, where several layers of decorative plaster were applied. The attentive eye can detect different periods in which the chapel was enlarged or modified.
The walls and the vault are covered with decorations traceable to the year 1899. The back wall of the apse presents an interesting Annunciation and the right wall a San Chiaffredo and it is likely that these frescos date from the end of the 15th century.

The complex of buildings towers in the Infernotto Valley on the lower foothills of Monviso and consists of the castle-fortress of the 11th century with its three rings of walls surrounded by forests, vineyards, mills and old rural buildings, the 14th century palazzo with its precious frescos, the underground chapel with its 15th century frescos, the historic park of the palazzo with its botanical collection and hundred year old trees, the courtyard and finally the collection of carriages.
This privately owned structure belongs to and has been preserved by the same Malingri family for more than seven hundred years and offers the visitor a place which has remained intact during the centuries and is rich in historic, artistic, environmental and natural inspiration.

The ancient mansion of the Counts Saluzzo of Paesana and Castellar, originally built in the 14th century and recently reconstructed, sits enthroned on a hill nestled in the placidness of the Bronda Valley.
Today the castle is in part a private residence. Nevertheless the throne room, the upper gallery with its collection of uniforms and light weapons of the Royal Italian Army, the park and the basements can be visited.