Mistà, is the ancient Occitan term that in the past stood for small sacred images and has now gained the proportions of a great cultural project.
In fact, Mistà has become an important festival that takes place every year in July and August. In the Romanesque and Gothic churches of the Mistà circuit, or on their squares, musicians of international fame create with their classic, jazz, ethno or Occitan concerts a magical entwining of art and music that cannot be found elsewhere.
However, the churches of Mistà are also stunning in their silence, when it is possible to experience the fascination of the painted narrations and the rhythm of nature, both skilfully illustrated on guided hikes and tours

In the following some of the Mistà treasures open to the public in the valleys Po, Bronda and Infernotto are listed 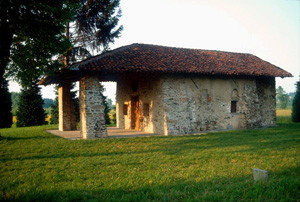 The chapel probably dates back to the 13th century and is situated not far from the centre of Castellar, on the cemetery grounds that belonged to a “grangia”, a grange of Staffarda Abbey. The building is made of stone; the part of the apse is probably the most ancient, while the nave appears to have been added later.
Originally the chapel was dedicated to Saint Sebastian and indeed many interior frescos refer to him and his life, while the designation “Saint Ponzio” relates to the church of the village that was destroyed in 1725 to make room for the present parish church.
Of interest is the choir, decorated with frescoes by Pietro da Saluzzo.

PAGNO, Abbey of the Saints Peter and Colombano

Legend has it that the abbey was founded at the request of the Lombard king Aistulf (749-756) by the monks hailing from the monastery of San Colombano di Bobbio near Piacenza.
For a long time it remained under the control of the Novalesa Abbey, being annexed to the diocese of Saluzzo only in 1764.
It was subject to complex incidences like its destruction by the Saracens arriving from Provence in 906 and its reconstruction in 1040 ordered by Adelaide, Marchioness of Susa. The Romanesque facade is decorated with a Lombard band at mid-height and three arched windows above it, all to be found on the back side of the church towards the cemetery.
On the left side a fresco with the image of Saint Christopher is still visible.
Towering over the building is the 13th century steeple of several floors in Lombard style.
Noteworthy among the remains of the interior decoration is without doubt the fresco of the Archangel Michael, attributed to Hans Clemer or to his school and dating back to the beginning of the 16th century. 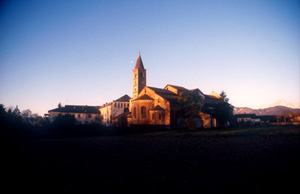 t was founded around the year 1135 by Cistercian monks on territory donated by Manfredo I, Marquis of Saluzzo.
The swampy and wooded land was cultivated by the monks and between the 12th and the 13th centuries Staffarda became a great agricultural enterprise.
After its destruction during a battle between the French and Piedmont in the 17th century reconstruction works started and the abbey passed on to the Mauritian Order.
Today it presents itself as a complex of buildings in Romanesque-Gothic style. Interesting are the quadratic cloister with twin marble columns, the Gothic steeple of four floors built in 1250 and the vestry and the chapter house with their cross-ribbed vaults.
The church of the abbey is bare and austere inside according to the Cistercian rules; interesting is the monumental polyptych of the main altar made of carved polychrome wood, a work by Pascale Oddone (1531-1533).

The chapel of the Marquises is situated under the only remaining tower of the lower castle, seat of today’s town hall. It is characterised by late-Gothic architecture and inside it preserves important paintings on walls and vaults dedicated to the patron saints of the Marquises of Saluzzo, attributed to the Flemish painter Hans Clemer and completed between 1516 and 1519.

he church was built in 1483 at the request of the municipality of Revello and Marquis Ludovico II and presents itself mainly in late-Gothic style, while some parts, such as the portal, anticipate the Renaissance style. Inside it preserves precious artwork like the pulpit made of walnut wood. The polyptych of the Saints Peter and Paul from 1503 is attributed to Clemer.