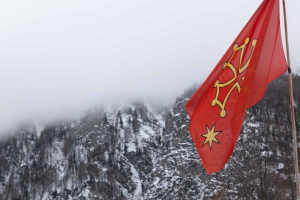 The cultural identity, the Occitan soul, can be perceived in the proud sense of belonging.
It is a strong spirit that today regains momentum combining tradition and modernity. Occitan, the medieval troubadours’ language, is still nowadays widely spoken in the valley, which has retained age-old festivals. Costume parades like the “Baia” and the “Beò”, processions for patron saints and ancient musical instruments renew every time this precious heritage in a kaleidoscope of colours, rhythms and emotions.

This kind of artistic expression has always been very important for the Occitan culture. The trobadours’poems were sung and accompanied by instruments.
Even today, mainly in the upper valley, traditional dances are an aspect of this culture, which is particularly alive, especially among young ones.

Some music pieces are almost certainly of medieval origin, a good number is from the following centuries while others are new compositions.
The most used instrument was the violin. It was held pointing downwards and played with double chords, one of them serving as bass voice.
Since the end of the 19th century the violin was gradually replaced by various kinds of accordions and diatonic accordions, which were accompanied by instruments of very old tradition, such as the hurdy gurdy, the “galoubet” (small flute) and others.
Among the minor instruments, today almost out of use, there are the “arbebo” (Jew’s harp) and several types of percussion instruments.

Traditional dances are held on several occasions, from the Baìa of Sampeyre to the Beò of Blins, on numerous patron saints’ festivals both in summer and winter, during the new invented or spontaneous celebrations, and there are a lot of single musicians and groups playing dancing music in traditional as well as in modern style. Many dances have been retained, like the well known giga and corenta. Some of them are group dances, with four, six or eight dancers forming couples; others include a not specified number of couples dancing all together. The balet is particular: once a dance itself (as it still is in the Vermenagna valley), it has become a sort of “end” that closes all dances of Sampeyre. 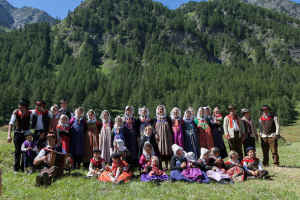 In the upper valley, especially in summer, on the occasion of patron saints’ festivals, you can see men, women and children in traditional costumes.
The women’s dress, particularly interesting, is different in the Castellata (Bellino, Pontechianale and Casteldelfino) and in Sampeyre. In the upper valley it is made of black woollen cloth – even the bridal one – with three big folds at the back and it is straight without tightening at the waist. It is adorned with an apron or a shawl made of cotton or wool (of silk for the brides), always very colourful. The bonnet (la bera) is also very precious: its brim consists of a broad bobbin lace that has been made using up to several hundred bobbins.
Patron saints’ festivals, during which costumes are worn, always feature a religious part with the Holy Mass, the Procession in costume and the auction, a public sale whose proceeds are devolved to chapels. The secular part features various entertainments, games and the inevitable dance party in the evening.

Have fun playing with our memory game in English, Italian and Occitan!