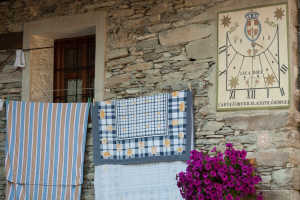 In the past as well as today the use of sundials in the Province of Cuneo, and particularly in the Varaita valley, has had a vigorous development.
In the valley the visitor might be stunned by the votive pillars that he will find along the trails, by the frescos that adorn the houses or huts and especially by the considerably numerous sundials, painted on the walls of private houses or chapels. Their mottos remind those who read the hour of the inevitable flight of time. The Bellino valley is one of the areas which are especially rich with these treasures. More than 30 sundials have been registered here, all of them visible, some of them recently restored by the Solaria company. Going up the valley it is possible to follow an itinerary of the discovery of time.

At house No. 6 the oldest sundial of the municipality, dating from 1735, can be seen.

On the walls of the Romanesque parish church of Saint James a sundial, painted in the 19th century, carries the following motto that thanks to the recent restoration is now completely legible: SANS SOLEIL NE DIT RIEN DU TOUT C’EST A-DIRE SINE SOLE SILET, without sun it says nothing.

At house No. 2, an old monastery that is now intended for private housing, a sundial is well visible. Its date is only in part readable (187?). Interesting is the fact that it is flanked by three further sundials that might date from former times or, more simply, are samples of execution for the one now visible.

On the walls of house No. 47 two further sundials (1866 and 1871) were made. One of them bears a French inscription that is not quite correct: vers le couchant je m’incline et vers la mort tu chamine (towards the sun I incline and towards death you walk).

Two further mottos are characteristic for two sundials in the same district: the one on the church of the Holy Ghost reads: solem e mundo tollere videntur qui amicitiam e vita tollunt (Those who eliminate friendship from their lives seem to eliminate the sun from the world).
At house No. 22 on a private building the sundial, signed by the author Luca Roux 1915, reminds us: art is difficult, criticism is easy.

Once again a Latin inscription is clearly visible at house No. 7 on one of the sundials we find here. The older one, dating from 1821 has been uncovered from under the second one and been transferred to its side. The second one reads: exspecto solem/ cur sine sole sileo (I wait for the sun, because I am silent without the sun).

At houses No. 44 and 45 another motto on a sundial dating from the 19th century admonishes the wanderer: watching the hour, o wanderer, your thought turns to your death.

At house No. 24 the frailty of man inspires the author BRUN B, who cites: le moindre nuage me trahit, le moindre souffle te detruit (the small cloud betrays me, the gentlest breeze destroys you).

Even in this district, where houses have never been inhabited permanently but served merely as summer residences, many sundials were painted. An example is the one on the chapel of Saint Anne by Luca Roux (1936): Saint Anne pray for us who commend ourselves to you.